The smartphone is an extension of the self for the generation that has grown up living and learning online. Their experience and perception of you via your 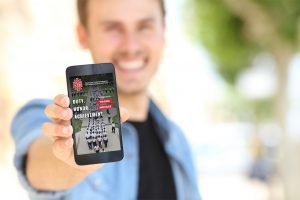 website, right at initial inquiry, is a key touchpoint to compel engagement with them.

The numbers tell the story! More than 80% of Generation Z own a smartphone. At initial inquiry, nearly 4 out 5 of your prospects will be viewing your website through a 5” lens.

A third of those students will even submit an Application via their smartphone. (Chegg: Mobilizing Admissions: The 2016 Social Admissions Report)

GenZers have grown up in a culture of short, fast, on-demand transactions and immediate pay-off. It’s all around us now – think Snapchat, Instagram, Amazon 1-click. Unlike the generations that have grown up in the transition to the online world who have been willing to learn new systems and tolerate bad design, GenZers expect a user interface to be intuitive and mobile apps to just work. Testing shows that they will “just move on.” So, when it comes to engaging GenZ, designing for mobile interaction is a must.